Move-to-earn: Getting fit with play-to-earn 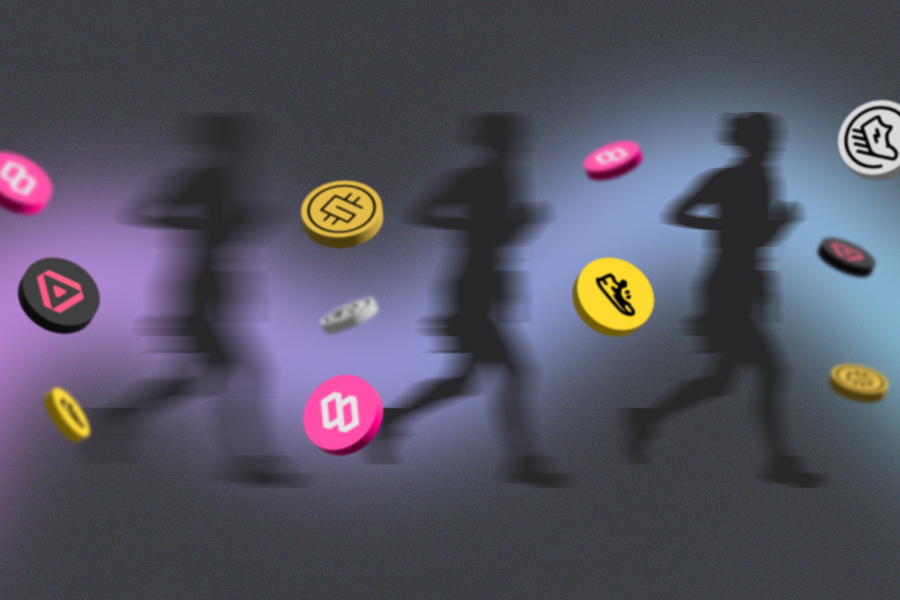 Earning money from your daily walk, late night gym session or weekend run almost seems too good to be true. But the latest development in the crypto sector means you can do exactly that. Here’s everything you need to know about move-to-earn games.

Play-to-earn games have become a staple in the crypto world. Games like Axie Infinity, Star Atlas and Raid Party allow gamers to earn crypto tokens and in-game assets which can be sold for real money. However, as with all areas of web3, innovation is constantly shaking up the play-to-earn sector. And the latest advancement provides people with the opportunity to earn not from playing, but from working out; here’s everything you need to know about move-to-earn.

Move-to-earn combines fitness with monetary incentives to encourage people to swap their digital devices for the great outdoors. This is a far cry from play-to-earn which usually involves gamers grinding for hours on end behind a computer screen.

Although available to all, move-to-earn targets those familiar with web3 technology, allowing crypto users to monetise their physical workouts.

What was the first move-to-earn game?

The first, and biggest, project in the move-to-earn sector was STEPN, which markets itself as a web3 lifestyle app that rewards users for movement. To get involved, you’ll first need to purchase a STEPN NFT shoe, with the very cheapest currently starting at around 1 SOL ($30 at the time of writing). At its peak, the cheapest STEPN shoe was upwards of $600 and the app had over 700,000 active users!

The idea of STEPN is simple: players walk, jog or sprint while their phones track their movement. As they move they are rewarded with tokens. To understand how you can actually make money from simply exercising, it’s useful to first understand the mechanics of the game.

STEPN shoes are split into 4 types: Walkers, Joggers, Runners and Trainers. Depending on the type of shoe you own, you’ll need to exercise within a certain speed range in order to earn through STEPN. For example, if you own a runner you’ll need to be moving between 8-20 kilometres per hour.

To stop users from simply running non-stop and earning an infinite amount of the reward token (which they call Green Satoshi Token, or GST), users have a maximum amount of energy they can use per 24 hours. 1 shoe gives you 10 minutes worth of energy (1 energy = 5 minutes) to use daily, and each energy spent then gives you GST.

The more shoes you hold, the more energy you have that you can use daily. This incentivises users to buy or mint more shoes.

So the game, if you can call it that, is pretty simple. You buy a STEPN NFT and move to earn GST tokens each day. However, to keep users engaged, the STEPN team implemented a number of other features.

Firstly, you can level up your shoe to increase its stats and thus increase your earnings per walk. In order to level up you can spend your earned GST or buy more GST. Shoes also have durability which you’ll need to repair every so often, which once again requires GST to be spent.

Each shoe also has ‘gem’ slots, which are upgrades that you can apply to the shoe in order to boost its stats. To unlock a gem slot you also need to spend GST.

Finally, you can also acquire new shoes by ‘shoe-minting’, this involves matching two shoes together to produce a brand new one. You guessed it, to do this you’ll need to spend GST, as well as GMT (STEPN’s second token which is currently not earnable) and a ‘minting scroll’. When you ‘shoe-mint’, you’ll receive a ‘shoebox’ which you can then sell or open – each shoebox brings a different chance to earn a rarer shoe. The key to play-to-earn games’ economy is that almost all actions should require users to spend their earned tokens. This prevents users from simply farming to sell, and this worked well for STEPN’s Green Satoshi Token.

STEPN proceeded to have booming success as it quickly became a hit within the mainstream crypto community due to its ability to provide users with a fun way to exercise, earning potential and gamification elements to keep users hooked.

Following STEPN’s success, many new forms of move-to-earn games began to pop up. The majority followed STEPN’s approach with an NFT that users could equip to then earn by moving.

Step App was one such project that launched during STEPN’s boom, offering a cheaper alternative with similar gameplay and mechanics to STEPN which at the time had a very high entry price. They have their full release of the app scheduled for December 1st 2022 and even have a partnership with Usain Bolt.

Competitors also took a different approach, SweatCoin simply rewards users for taking steps which are tracked on your phone. Their aim was to simplify the onboarding process for users, understanding that having people purchase an NFT and needing a cryptocurrency wallet would potentially be a high barrier of entry for less tech-savvy users.

Other projects have tried to bring NFT technology to different audiences within the fitness world such as MetaGym which incentivises users who work out in a gym. Users have a metaverse character which links to their own workouts through a smart watch allowing them to compete with other users to earn tokens.

Dotmoovs pushes the move-to-earn sector further by using smartphone cameras to track users as they participate in activities such as freestyle football or dancing. It pits people against each other and uses their own AI to score with the winner earning tokens. They plan to implement many different sports activities in the future. Currently the main limiting factor for projects trying to incorporate new ideas, besides ones like STEPN, is technology.

STEPN’s success can be attributed to the fact it is simple and effective as you simply need to push start on the app and begin moving, as the app uses users’ phone location and gyrometer. New projects are also integrating smart watches to monitor other aspects of users which would allow for the space to grow further.

The development of move-to-earn is also dependent on the wider adoption of web3 technology. A recent survey showed that only 13% of people actually know what web3 is, while another reported that 94% of the crypto community is younger than 40, with Gen Z accounting for a considerable portion of crypto users.

Incentivising people to exercise could have wide reaching positive impacts, however using move-to-earn applications often requires technical know-how that is currently alien to the vast majority, in particular the older generations.

Considering exercise is done by those of all ages, play-to-earn projects must find ways to reduce this barrier to entry by utilising more familiar onboarding methods and creating a simplified user experience.

Finally, move-to-earn needs to find a way to differentiate from play-to-earn ‘earning’ mechanics which incentivises users by offering tokens as rewards. Not surprisingly, this sees users cash in by selling their reward token which usually results in a drop in value for the project. Eventually this causes users to stop playing the game as the rewards are no longer deemed valuable enough to incentivise gamers.

To prevent move-to-earn projects going the same way, creators need to consider how earning potential can be achieved without harming longevity.

While move-to-earn is currently only just beginning, the potential could be enormous for the web3 community and beyond. Currently the majority of activities within web3 involve high amounts of screen time and sedentary behaviour, so getting users out of the house and exercising can hopefully spur on positive habits within the community.