How Chainlink and Microsoft are Working Together 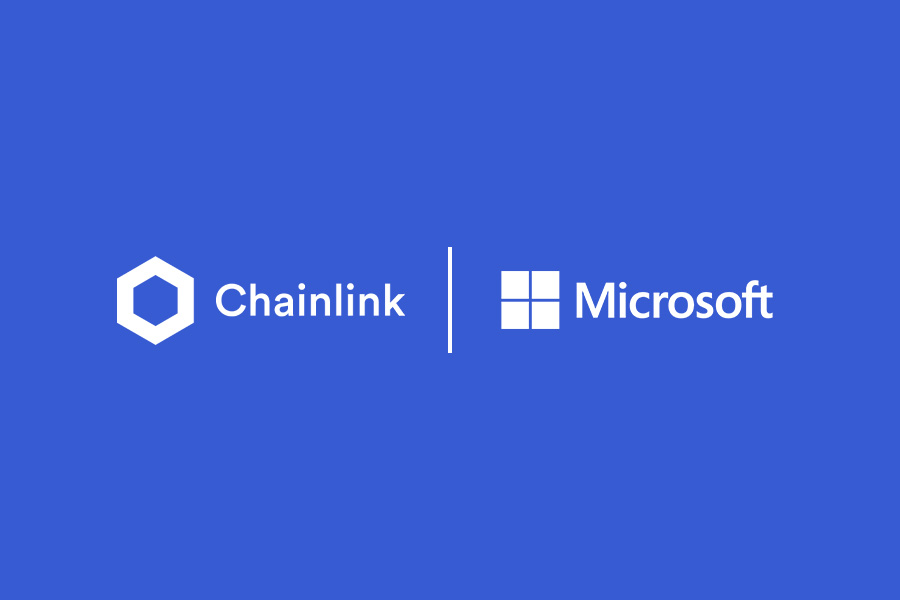 Could Enterprise adoption from the likes of Microsoft establish Chainlink as ‘The Standard’ provider for Oracle Services?

With 1.5 billion users worldwide using the Windows operating systems and another 1.2 billion using Microsoft office it’s no surprise that any integration would be huge news for anyone in the crypto world.

Huge corporations such as IBM, JPMorgan, Disney and now Microsoft have all now adopted Blockchain technology into their services or operations.

All these companies have something in common. They all have a wealth of data and information that is stored off-chain. Therefore secure Oracles are of the most utmost importance when it comes to using this Blockchain technology.

The SmartCon 2020 conference hinted at another huge integration that could be on the table. We’ve taken a look at the different ways in which Chainlink and Microsoft are already working together and the possible integrations which could be coming soon.

On Wednesday 7th October 2020, Madeleine Shang made a GitHub commit that might have turned the heads of many Chainlink holders and Blockchain enthusiasts alike.

Microsoft regularly contributes to the development community and has its own Open Source Development library on GitHub. In the module, Smart Contract Basics, Microsoft has included the use of Chainlink to be used as an Acceptance Criteria.

In the example provided in the README.md file, Microsoft demonstrates how Chainlink can be set up and integrated into a contract. It also shows how Chainlink requests can be generated to check the price of a token. The value of which is transferred from the appropriate oracle to be used in the Smart Contract. This suggests that Microsoft is not only going to be using Chainlink oracles in their smart contracts, they are openly endorsing them.

The fact that Microsoft considers Oracles provided by Chainlink to be ‘Smart Contract Basics’, suggests how they value the need to provide Smart Contracts with reliable and up to date data, which doesn’t compromise an entire Smart Contract.

This is a huge endorsement for Chainlink as many developers in organisations worldwide will look to Microsoft when looking to integrate Blockchain technology into their products and services.

Aaron Wright who is Co-Founder of Open Law announced huge news at the SmartCon 2020. Stating that:

“We’ve built a kind of metamask for Microsoft Office where 1.2B users can interact directly from Microsoft Word to Chainlink Oracles and execute Smart Contracts”.

All this is possible with just a click of a button. This would enable these legal Smart Contracts to pull in data from Chainlink oracles. This could be anything such as the outcome of an event or the price of an asset.

This could dramatically increase the use case for Chainlink oracles across the legal sector and beyond, as Open Law has built a solution where no developer is needed in order to send a request to an Oracle.

Many in the Chainlink community were left excited at SmartCon 2020 after Yorke Rhodes hinted at the possibility of a Chainlink XBOX integration. Yorke works as a Principal Program Manager in Blockchain Engineering at Microsoft.

Take a look at this article on Microsoft Blockchain Royalties from 2018. EY and Microsoft released a Blockchain solution to be used by Ubisoft who are huge players in the gaming market. This is a similar thing to what Yorke Rhodes from Microsoft was describing at SmartCon, with content creators getting paid immediately through the use of Smart Contracts and Chainlink. Halo is an extremely popular Xbox game and franchise which is worth over $5 billion dollars. The game is developed by Microsoft and 343 Industries and is an exclusive Xbox game. A key part of the game is played via Xbox-Live where gamers from around the world can compete against each other.

Take a look at this Chainlink External Adaptor for Halo 5. The description for the adapter reads: “Adapter that searches for Halo 5 match results from either a specific matchid, or attempts to find the proper match using other input variables like date, gamertags”.

Could this be an attempt at using a Chainlink oracle to determine the winner of a Halo match? Blockchain technology is already being used in E-Sports to automatically pay out winners of tournaments. However, the use of Chainlink here could remove the need for a centralised party to determine the outcome of a game. Check out our article on Blockchain E-Sports to read more about how the Blockchain and gaming worlds can come together.

What do you think? Is this just the tip of the iceberg for Chainlink and Microsoft? Could Microsoft give chainlink more exposure on the global stage and aid industry adoption?

Let us know what you think on Twitter at @uxsequence.