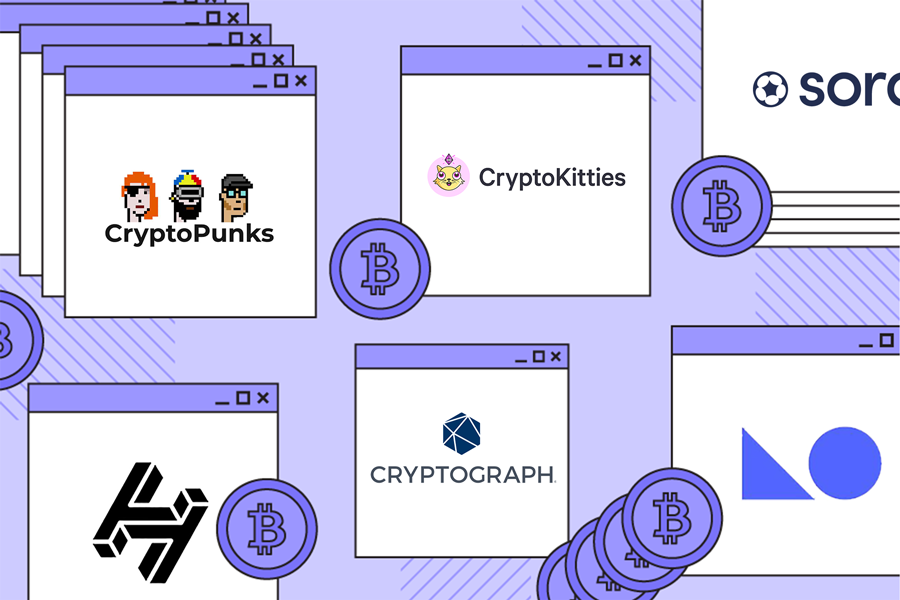 Ever heard of a Non-Fungible Token? We've taken a look at some great projects already using the Blockchain based tokens.

How on earth did Paris Hilton recently manage to sell a picture of a cat for over $17,000 worth of ETH? Welcome to the world of Non-Fungible Tokens (NFT) stored on the Blockchain.

As a Blockchain Design agency we love to work with NFT projects, here’s a rundown of exactly what they are, and some great examples of projects already using them!

What are Non-Fungible Assets?

Non-Fungible Assets (NFA) are nothing new they’ve existed for years. Ever bought a website domain? Registered copyright? Even a Twitter handle can be seen as a Non Fungible Asset.

There’s one thing that all these assets have in common though. All of them can be taken away. This is where None-Fungible Tokens come in (NFT). These can never be taken away. Once you own an NFT you have it for life (unless you lose your key).

What are Non-Fungible Tokens?

In short, they represent something unique, something that isn’t mutually interchangeable.

The first example of Non-Fungible Tokens was through a project called CRYPTOPUNKS. This enabled users to sell, buy and store 10,000 unique collectable characters with the proof of ownership being stored on the Ethereum Blockchain. Since the value of art is dependent on a range of factors including the authenticity, age and number of owners, it makes perfect sense to store it as an NFT on the Blockchain.

Artists often have problems proving the authenticity of their work, especially with digital art. However, the use of the Blockchain and NFT’s can help solve this problem. Currently, an artist may publish their artwork on their website, social media or a blogging site, however, this doesn’t prove ownership, many of these platforms often don’t even offer a reliable date stamp.

However, through the use of Blockchain and NFT’s artists can upload their art to a website that adds these details to the Blockchain. This means that the author’s details and authenticity of the art can be stored on the tamperproof and secure Blockchain. As everything is recorded on a public ledger it becomes possible to trace the art to the owner and the first date it was published.

KnownOrigin is a platform that allows artists to showcase and sell their rare digital artwork and collectables. Previously, buying art had very high entry barriers for everyday people, as proving authenticity without an art expert is extremely difficult. However, through the use of KnownOrigin users can easily identify the authentic owner and have confidence in their purchase. The platform uses the Ethereum network, allowing artists to tokenise their work and then list it on the KnownOrigin website as a unique NFT. When a piece of art is bought using ETH the address of the buyer is captured. This allows for the identification of the new author to be recorded on the blockchain.

The digital art platform hosts over 1000 artists, with over 17,000 pieces of art being sold since its inception in 2018. The website was built by the BlockRocket team.

Bitcoin Origins is a highly scarce series of digital collectable cards immortalizing the most significant moments in Bitcoin’s history. The cards are all created by talented artists and are released on the Bitcoin Origins website, selling out in a matter of seconds on the WAX Blockchain. Sequence partnered with Bitcoin Origins to deliver an interactive community website, helping the project grow and scale to one of the biggest NFT projects in the Blockchain space. You can check out the website we built or take a look at a quick preview below.

Many in the Blockchain space have heard recently that Paris Hilton has sold her digital painting of a cat for 40 ETH, equating to a whopping $17,000 at the time of sale. This was done through the charity digital art site Cryptograph. Cryptograph allows users to sell collectables, this is often in the form of famous drawings, diagrams or paintings. These collectables are often created by famous people such as Paris Hilton, Seth Green and Ashley Greene. All of these celebrities have posted their work on the website to auction off using ETH.

The platform was specifically designed to raise money for charitable causes and has raised thousands since its inception. You can take a look at the latest auctions available to bid on here.

Non-Fungible Tokens have also enabled gaming and blockchain to join forces. NFT’s are unique, this is big news in the gaming world. This is because unique means something is rare, making it desirable to other gamers. The competitive nature of games means that users always want to build either a better character, world or get better add-ons or perks.

Sorare is a fantasy football trading card game, where users can trade the cards of real players and manage their team to win huge prizes every week. The fantasy football game currently has 126 official clubs including clubs from huge leagues such as the Premier League, Bundesliga and Serie A, and European competitions such as the Champions League. Each week Sorare hosts a wide range of tournaments (S05) where players can enter their teams (made up of 5 players) and compete for prizes. Prizes start from 0.01 ETH to tradable cards which can be worth thousands.

The cards are all NFT’s and are stored on the Ethereum Blockchain. This means the ownership of the cards can be verified as all the information is stored in the meta description of the asset. Take a look at the trading history here. As everything is stored on a public ledger everyone can see all the transactions on the platform.

Want to read more about Sorare? Check out this full guide to Sorare. Sorare has recently branched out to Basketball too, you can check out a full guide to NBA on Sorare here and learn how the gameplay works!

Disclaimer – We’ve snuck a little referral link should you wish to join, with our link you get a free rare card when you buy 5 players on auction!

NBA Top Shot has quickly become one of the fastest growing NFT projects, working on top of the Flow Blockchain, which also handles some other major licensed NFT projects such as MotoGP Ignition and upcoming Dr Seuss. The general premise of NBA Top Shot Moments is collectable trading cards based on players in the National Basketball Association or NBA. In reality, the trading cards feature more than just a photo and some statistics about each player, with a shot video also included, usually of their best performance in a game.

The players are released in different “sets”, these are usually highly stylized and based around a certain theme, such as “MVP Moves” & “Conference Semifinals” then inside these packs players are given rarities which then dictate how many editions of that “Moment” have been created.

Due to the popular nature of the Top Shot game, other competitors are now moving into the play to earn NBA setting and competing against Top Shot, such as Sorare, you can learn more about the differences and similarities of the games here: NBA Top Shot Vs Sorare NBA. As the Virtual Cats are NFT’s they contain information embedded in their meta description which states details such as the owner of the asset, and what makes it unique.

In 2017 the game was so popular that it caused transactions to slow down on the Ethereum network, causing a 6 fold increase in pending transactions. This highlighted some of the scalability issues with Ethereum which is one of the reasons that Etheruem is now looking at switching to Proof of Stake.

Some NFTs can be used to unlock exclusive benefits for holders. They act as digital membership or loyalty cards.

An example of this is a line of NFTs distributed by the pre-IDO platform Launchpool.

The NFTs are only distributed to long term holders of the Launchpool’s token, $LPOOL. They help to create a relationship between Launchpool and its community, by providing them with something that is both exclusive and has real utility.

There is currently a huge amount of centralisation when it comes to domains and the internet as a whole. We pay the companies that own .com and .net just for the right to rent their domains. Massive websites such as TikTok are also being blocked around the world due to the centralisation

These domains and systems are often vulnerable to hacking due to their centralised architecture, the information regarding the ownership of the domain is all held on these centralised servers. When this information is stored on the Blockchain this makes the system much more robust and secure as there is no centralised point to target.

Handshake is a decentralised naming and certificate authority. Who provides proof of ownership of domains without the need for central authorities having control over them. This means your website domain will never be blocked.

The domains which are bought on NameBase.io are then stored on the HandShake Blockchain. This means that the buyer’s details can be stored on the Blockchain, without the need for a centralised party to hold this information. The project has received over $10 million in funding from excited investors who see the value in a decentralised web. You can read more about Handshake in our article here.

Talk to us about bringing your next NFT project to life.