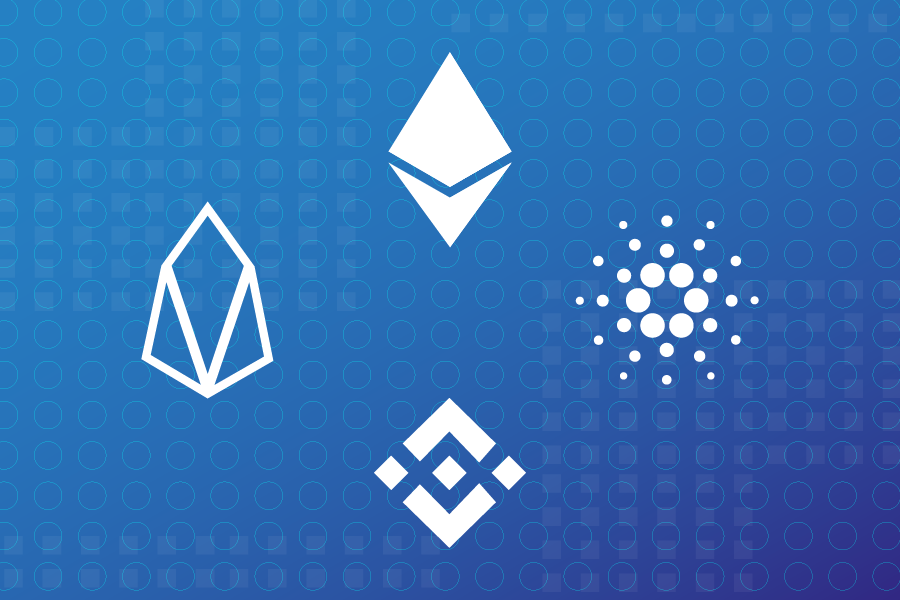 With so many different Blockchains launching and training to take Ethereum's crown, we decided to summarise these so-called “Eth-killers”.

The current leader, Ethereum, is huge. It is the platform for the majority(80%) of the Dapps (Decentralized Applications) currently in use. Ethereum is the brainchild of Vitalik Buterin after he realised that Bitcoin could benefit from having a more advanced scripting language to create uses other than monetary transactions. He published a whitepaper describing Ethereum in 2013, with the vision of decentralised applications further down the line. He went on to announce Ethereum in early 2014 and launched in the middle of 2015. Ethereum had a number of founders including Vitalik Buterin, Anthony Di Iorio, Charles Hoskinson, Mihai Alisie & Amir Chetrit, with Joseph Lubin, Gavin Wood, & Jeffrey Wilcke joining a little after the initial five. This is a larger founding group than most projects and they had a few disagreements along the way. The most notable of which is when Vitalik had announced that Ethereum was moving forward as a non-profit organisation, which led to a swift departure of Charles Hoskinson. So why are there so many “eth-killers” if Ethereum is the king of Dapps?

The Ethereum network relies on gas to function. This is the cost of the computation you want to complete. This means every transaction/smart contract interaction costs gas, which is paid to the miners for running their nodes to power the network. The cost of gas is usually dependent on how congested the network is, if the network is very busy, it can cost a lot more for your transaction/interaction to be accepted. This is one of the main reasons many of these so-called “eth-killers” have been gathering attention from both developers and the general blockchain community. This difference is usually due to a consensus algorithm being used. This gets a bit complicated, but it’s not too bad if you understand that there are a few different types, Proof of Work (PoW), Proof of Stake (PoS), Delegated Proof of Stake (DPoS), and a few other unique ones. Ethereum uses Proof of Work, which makes it highly compute-intensive and therefore very electrically in-efficient. There are plans for Ethereum to move to ETH 2.0 in the next two years, which will bring in a change in consensus algorithm  to Proof of Stake (along with other exciting changes!) This transition should hopefully help reduce the environmental impact of Ethereum and reduce fees simultaneously.

You can learn more about (PoS) Proof of Stake and how its different to (PoW). A product of Block.one, Eosio is a Delegated Proof of Stake Blockchain, that is open source and designed for both public and private blockchain deployments. It attempts to stand out from the crowd by trying to beat Ethereum’s problems with speed, scalability, and flexibility by using a unique mechanism, parallel execution and asynchronous communication methodology across the network. This is just fancy technical speak for it being much faster and being more user friendly by allowing free transactions, by moving away from a pay-per-transaction model to instead take transaction fees from stakeholders.

Even if you’re not deeply into cryptocurrencies, you’ll have probably still heard of Binance, due to the huge size of its exchange. Binance Smart Chain is Binance’s attempt to break out of just the exchange world and to be a bigger player in the wider blockchain space. It is a fork of Ethereum, which allows it to utilise the EVM (Ethereum Virtual Machine) for smart contract deployment. The major difference that has been made in the fork from Ethereum is the use of a Proof of Stake consensus algorithm being used, this makes it much more efficient in both transaction speed and cost. This lead to the Binance Smart chain being the chosen blockchain for use in many projects, such as Pancake swap & Battle Pets.

Another major difference between the BSC and Ethereum networks is the more centralised nature. The BSC network has just 21 node operators elected by Binance Coin (BNB) holders, compared to the over 90,000 active Ethereum validators.

After leaving Ethereum, due to the disagreement with co-founder Vitalik Buterin, Charles Hoskinson and another ethereum Co-founder, Jeremy Wood, went on to found IOHK (Input Output Hong Kong.) Cardano is an engineering and research organisation specialising in cryptocurrency and blockchain development. IOHK’s key project is Cardano, a blockchain and smart contract platform which hosts the $ADA cryptocurrency.

Cardano is heavily research focused on the development of its platform, choosing peer-reviewed research to enable a slow, yet thorough and deep, development style. This has made Cardano slow to roll out features that are already live on Ethereum (in particular smart contracts), creating scepticism in the community around its rollout and scaling and whether the promises Charles has made will be followed through on. Critics wonder whether it will live up to the hype and promises that Hoskinson has made.