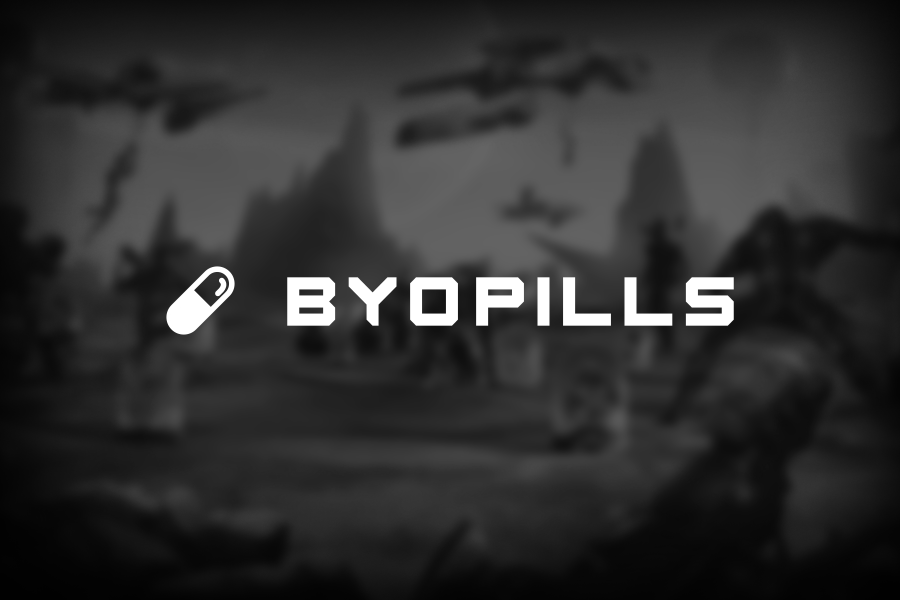 BYOPills is an NFT collection made up of 10,000 3D pills, all providing differing in-game utility in the BYOVERSE: the virtual world that is home to one of the most anticipated play-to-earn games that we’ve come across so far.

Many experts believe that the next boom within web3 will come from play-to-earn (P2E) games.

Whilst it could be argued the space has already exploded as the industry grew to be worth $3billion in 2021, there certainly seems to be a new wave of P2E games emerging that have the potential to rival traditional games.

Whilst the likes of Axie Infinity and Zed Run have achieved roaring success due to their earning potential for top players, their gameplay is at its best, simple.

The next step for blockchain games is to integrate NFT-shaped gaming assets with metaverse technology to create a financially rewarding yet highly gamified experience.

Imagine a World Of Warcraft where assets existed as NFTs. Or a Call Of Duty game where players are rewarded with real money for their kill streaks. That’s essentially what BYOPills is aiming to achieve.

Seeing as we’re bullish on BYOPills, we thought we’d spread the word by putting together a guide on what we know about the project so far.

BYOPills (Blue, Yellow, Orange Pills or Bring Your Own Pills according to the BYOPills Discord) is a collection of 10,000 NFTs that have in-game utility within the BYOVERSE. The BYOVERSE is the virtual gaming world where BYOPills gamers will control their avatars (known as Apostles).

Whilst the BYOPills kickstarted the project, they also granted holders access to future NFTs related to the game. After pills came keys, apostles, vapes, crafts and land – all with differing in-game utility which we’ll go on to explain later.

The long-term plan of the creators is to integrate the BYOPills with other blockchain-based games by allowing owners to use their pills as ‘power-ups’.

The BYOPills team have kept the story of the game pretty unclear – most likely deliberately to add to the mysteriousness of the project. It would also appear that by exploring the BYOVERSE, players will be able to piece together the whole backstory which will make up a big part of the game once released.

What we do know is that the BYOPills story revolves around a mysterious character known as Boris The Cook who gives us real ‘Heisenberg of the metaverse’ vibes. We know Boris is responsible for creating the BYOPills, cooking up the 10,000 pills in a relatively unexplained way.

The BYOPills website tells us that Boris has dedicated his life to reaching the highest level of consciousness and brain enlightenment. To achieve this, Boris has 10,000 trips worth of wisdom – which explains the 10,000 pills. It also tells us there are no limits to where Boris would stop.

Whilst this sounds like Boris will have a major role to play in the game, another thing we know is that Boris is currently missing and his last location is unknown.

The final, and perhaps the most important piece of information we have about Boris, is the fact that he has one more BYOPill hidden somewhere within the BYOVERSE that can be found through exploration. With even the cheapest pills having a floor price of around 0.5ETH, this would be quite a reward for the gamer who manages to find it.

However, we also know seeking out anything in the BYOVERSE won’t be straightforward. In terms of the map itself, the BYOVERSE will be a large, vast ecosystem made up of different regions – all with differing terrains, climates and native creatures.

Gamers will need to choose carefully which parts of the BYOVERSE they are going to spend their time exploring. For instance, the Oblivion Void area contains valuable treasures but only if you’re willing to brave the deadly radiation levels. On the flip side, No Man’s Land doesn’t appear to be the most lucrative area to explore, but these barren hills will be much safer for your Apostle.

The BYOPills project began with the release of the BYOPills. These were 10,000 NFTs existing on the Ethereum blockchain, released on 16th July, 2021 priced at 0.06ETH.

Each BYOPill is made up of a pill cap, pill bottom, ingredient, background, aura and trip which combine to result in a different trip effect for the holder. There are 17 trip effects which include things such as: altered time perception, encountering dead spirits, heightened senses, nightmares and paranoia.

Pill owners can view their unique trip effects on the Trip Replicator app.

Additionally, the BYOPills NFTs act as a key to unlocking other areas and NFTs within the BYOPills ecosystem.

For instance, those who owned a Pill were given the option to mint a free BYOKey which later unlocked Apostles (characters for the game). Other NFT drops followed including BYOVapes which gave access to BYOLand and BYOCrafts. This will become clearer as we progress.

To mint an Apostle, you’ll need an unclaimed BYOPill and a BYOKey.

Anyone who owned a BYOPill on August 26th, 2021, could claim a free BYOKey for each pill they owned. Pill owners then had a 6 day window in September to mint a key which could in turn be used to mint a genesis Apostle. In total, 7,642 BYOKeys were minted meaning there can only ever be a maximum of 7,642 genesis Apostles.

Every time an Apostle is minted, the Pill used is marked as claimed and the Key is burned. To date, 7,341 genesis Apostle’s have been minted.

Apostles act as your avatar or character in the BYOVERSE. As outlined above, BYOPill holders that claimed their free BYOKey were able to mint a genesis Apostle. These will fall into one of four tiers. The rarest type of Apostle is a Goddess, followed by Ancient, Psychonaut and the most common Apostle tier, Voyager.

If you’re looking to get your hands on an Apostle in order to play the game, you’ve got two options: buy an already minted Apostle via the secondary market which currently have a floor price of 0.25ETH, or alternatively, if you wish to mint one of the few remaining Apostle’s, you’ll need a BYOKey (floor price of 1ETH) and an unclaimed BYOPill (these would cost you in the region of 0.6ETH+ depending on rarity.)

You can check if BYOPills have been claimed or not here.

Of the 7,341 genesis apostles, only 11 are Goddess apostles meaning they make up a tiny 0.14% of the avatars in the BYOVERSE.

There are 880 Ancients, 2,878 Psychonauts and 3,569 Voyagers. Each tier of Apostle will have advantages in the BYOVERSE that enhances the player’s experience. 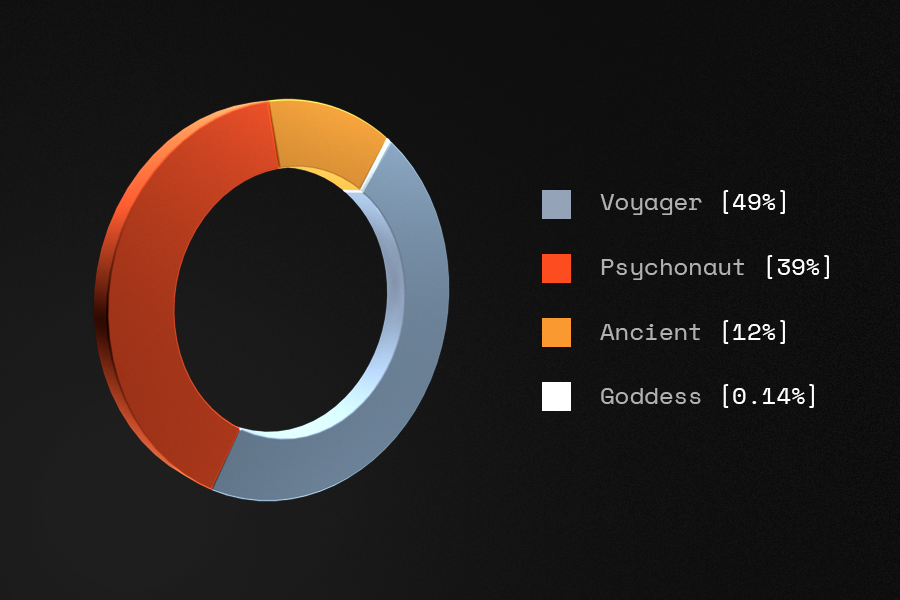 This could be in the form of certain stats such as stamina, speed and strength. Ancients look like they’d possess great strength in the BYOVERSE whilst Voyagers look much more nimble.

Alternatively, your apostle may come with unique characteristics that have in-game utility. Does your Apostle come with a light scope on their helmet? That could come in handy when exploring the darker regions of the BYOVERSE. Alternatively, those Apostles with white body armour look like they’d be able to camouflage nicely into their surroundings when exploring the snow-swept areas of the BYOVERSE.

The BYOVape grants holders access to certain areas of the BYOVERSE world and allows you to upgrade certain items.

Anyone who owned a BYOPill on November 19th was able to claim a free BYOVape. A BYOPill plus a BYOVape later allowed the user to mint a BYOCraft.

A land built to be inhabited by over 7,000 playable characters is going to need to be pretty big. So your Apostle will obviously need a mode of transport.

Holding a BYOPill and a BYOVape entitled you to claim a BYOCraft, a 3D vehicle used to explore the BYOVerse which owners can upgrade and customise.

The BYOCrafts all differ in rarity with different stats. Crafts are rated on acceleration, durability, max speed and handling.

As well as being used to get around the BYOVERSE a bit quicker, BYOCrafts can be used in races and in battle.

As is the case with many other metaverse games, the BYOP team have integrated land into the ecosystem.

A maximum of 10,056 land parcels will exist along with neutral, non-player owned land.

Again, owning a BYOPill is your key to owning your own land in the BYOVERSE. BYOPills give owners the opportunity to mint a piece of BYOLand. The Pill used to mind land will affect the terrain and climate of your land.

The pill below has a ‘jungle moss’ pill top which means anyone who uses this pill to mint land will end up with a plot of land in the Amazonia region. Whilst there are many plants for habitants to harvest in the Amazonia, dangers come in the form of an extremely hot, humid climate and highly aggressive beasts that roam the land.

Owning land will also allow you to harvest resources. Your Pill ingredient will determine what resources grow on your land whilst your tier of Apostle will determine how much you can harvest per day.

Land owners will also be able to use their land to generate $TRYP by taxing scavengers for gathering resources on your land. Alternatively, you may want to customise your land to keep unwanted guests out.

$TRYP is the native utility token of the BYOVerse that will power the BYOPill ecosystem.

It can be used to govern the BYOVERSE, buy in-game assets, upgrade your Apostle, and unlock special events.

(Note, you won’t be able to use $TRYP outside of the BYOPills ecosystem and it has no economic value. However, the BYOPills project will be launching a native currency for the BYOVERSE which will hold real-world value once we get closer to the launch of the game.)

Perhaps the biggest advantage of Apostles is their ability to passively earn $TRYP.  Holders can do this by staking their apostles. As you’d expect, the rarer your apostle, the more $TRYP they will yield.

Goddesses will earn 530 $TRYP, Ancients will earn 34 $TRYP, Psychonauts will earn 13.5 $TRYP and as the most common apostle tier, voyagers earn the least by yielding 10 $TRYP.

Whether the project’s success comes from its own BYOVERSE or compatibility with other games, all the signs are pointing towards BYOPills becoming a real contender in the play-to-earn gaming market. We’ll be sure to keep you updated with any further announcements!