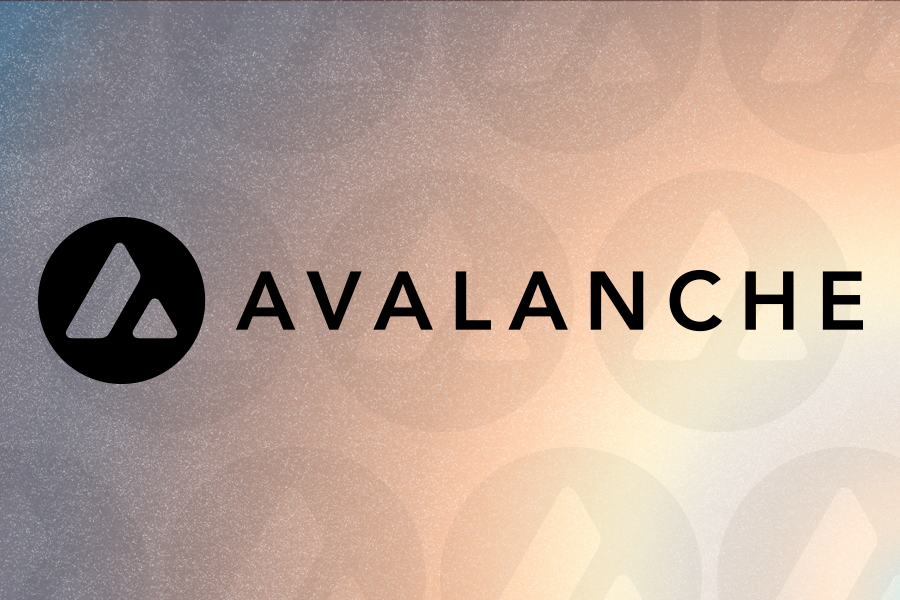 How can we connect the blockchain when there are so many different ecosystems and protocols? Cosmos and Polkadot have long been seen as the potential solution to this problem. But now there's a newer, quicker, potentially superior, layer 0 alternative: Avalanche.

It’s no secret that the decentralised web is underpinned by blockchain technology. But just as everyone appears to be getting their head around the blockchain, more and more networks are seemingly popping up.

With thousands of blockchains now in existence, it can be quite hard to understand just why there are so many, and just how one blockchain differs from another.

Avalanche is unique in the way that it allows users to create their own subnet of blockchains. This means businesses, governments and organisations can create public or private projects using the Avalanche network.

Avalanche is what is referred to as a layer 0 blockchain. To help you visualise this, let’s try and explain using examples from the physical world.

If we work in reverse, decentralised apps (dApps) such as Uniswap are launched on layer 2 of the blockchain. Think of these as our buildings of the blockchain: factories, offices, houses, etc. To build these layer 2 platforms, we need to build them on top of something. So think of layer 1 networks (such as Ethereum and Solana) as the land or the foundations in which these applications are built.

How does Avalanche work?

To understand how Avalanche works, there are 3 key terms we first need to understand. Allow us to do our best to explain them.

A validator is simply a computer that verifies transactions on a blockchain.

A subnet is a group of validators.

The Avalanche consensus model is very similar to the PoS model, where a validator is chosen to validate the transaction based on how much stake they commit to the network. Avalanche however uses something called subsampled voting where subnets are randomly asked to check transactions.

In simpler terms, the Snowman protocol makes Avalanche very compatible with Ethereum. In turn, this means anything you can do on Ethereum, you can do on Avalanche. 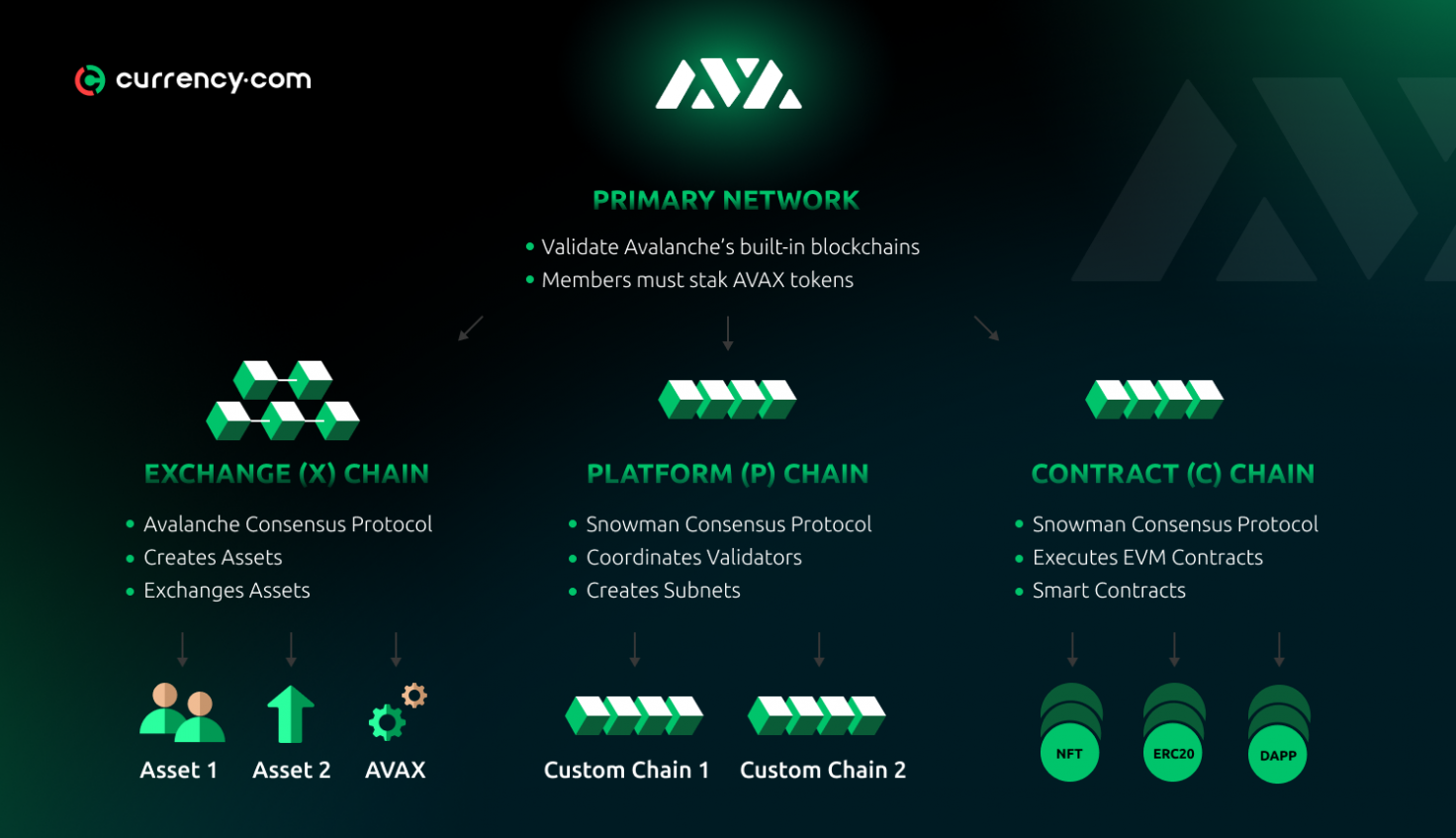 Getting into the technicalities, Avalanche is made up of three interoperable blockchains: the Platform chain (P-Chain), the Contracts Chain (C-Chain) and the Exchange chain (X-Chain).

The P-Chain is a metadata chain and coordinates validators, keeps track of active subnets and allows for the creation of new subnets. The platform chain implements the Snowman consensus protocol. To break this down, we can view the P-chain as a hub for subnets which essentially manages all those validators.

The contract Chain is the default smart contract chain on Avalanche and enables the creation of any Ethereum-compatible smart contracts. Avalanche supports developer tools that work with Ethereum so smart contracts on Ethereum can essentially be imported over to avalanche. This reduces friction for developers to create applications as they can fork existing ones. The contracts chain implements the Snowman consensus protocol powered by Avalanche.

The X-Chain is the default asset chain and enables the creation of new assets (tokens), exchanging between assets and cross subnet transfers. The Exchange chain implements the Avalanche consensus protocol. Its main function is to facilitate the transferring of assets, just like how you may send bitcoin to someone else, and they can send it back to you.

Because Avalanche has its own blockchain, as opposed to being built on top of another network, it means Avalanche’s native currency, AVAX, should be referred to as a coin rather than a token.

AVAX has a capped supply of 720 million, similar to bitcoin in a sense. This creates scarcity and ensures AVAX doesn’t suffer continuous dilution through inflation. All fees paid on the network are burned as a deflationary mechanism which can ultimately lead to a supply squeeze and price pump.

AVAX has three main use cases:

In terms of the price history of AVAX, you’d be pretty pleased with your returns if you’d have invested early 2021. At the start of the year, the price of AVAX was around $3.50. By the end of the year, AVAX had exploded which saw it hit an all-time high of $144.96 in November of 2021. 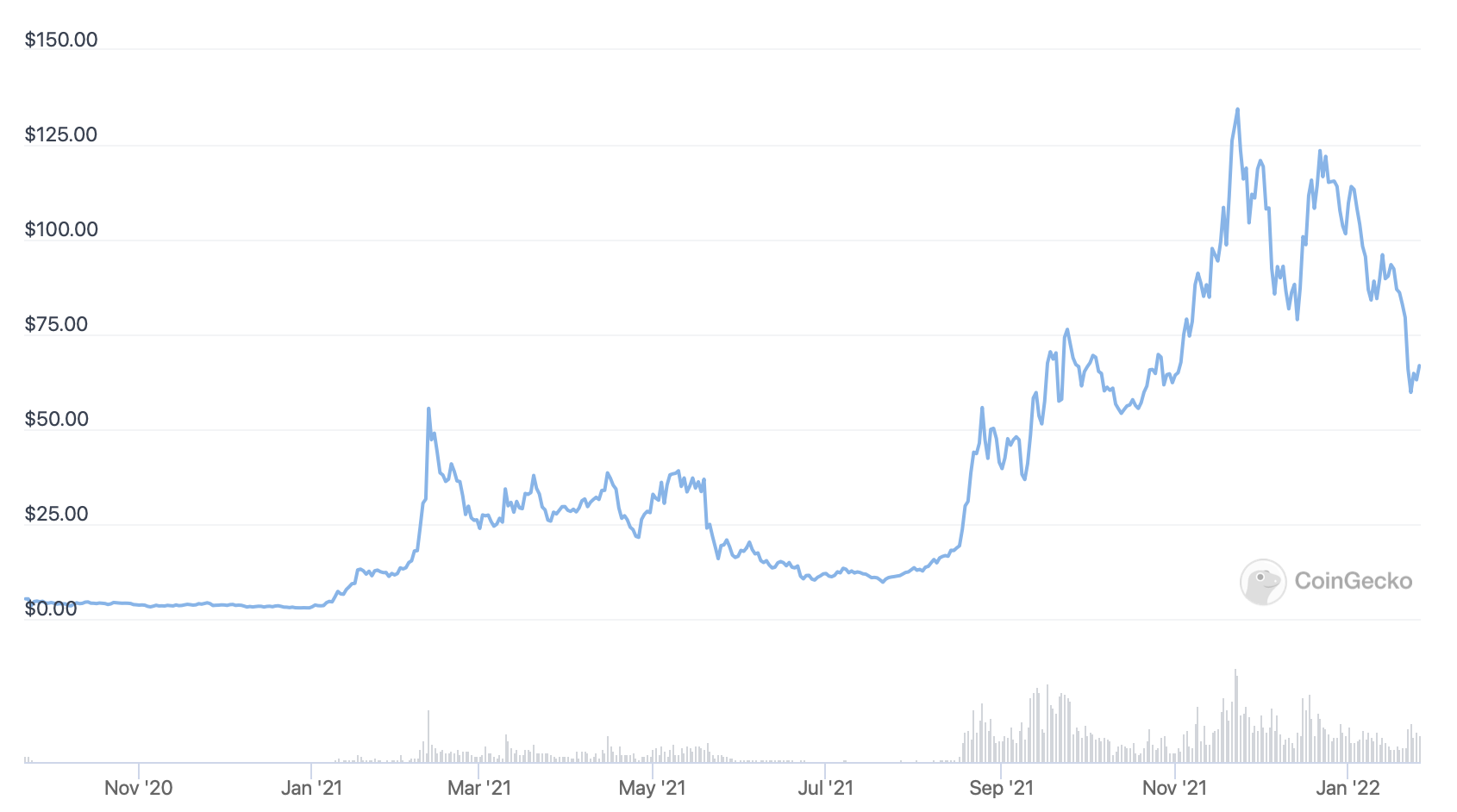 If you’re wondering where you can buy AVAX, it is available on all the major exchange platforms in the crypto world including Binance, Huobi, Coinbase, KuCoin, BitFinex and more. One would also get AVAX trading pairs with almost all the major currencies: including AVAX/BTC, AVAX/ETH, AVAX/USDT, AVAX/USDC, AVAX/BNB and more.

Polkadot was founded by Ethereum co-founder, Gavin Wood, in an attempt to improve interoperability between other blockchains. To understand Polkadot, think of the actual polka dot pattern and imagine every dot is a different blockchain; Polkadot connects the dots if you like.

So not surprisingly, one of the main advantages of Polkadot is security. Other blockchains and decentralised applications can essentially outsource their security to Polkadot. The downside of this is that if the Polkadot consensus is down, then so is any other network connected to the relay chain.

Cosmos refer to themselves as ‘the internet of blockchains’. Cosmos is a dual layer blockchain consisting of three layers: The application layer processes transactions, the networking layer allows for communication between transactions, and the consensus layer where nodes validate transactions on the system.

Advantages of Cosmos include the fact that anyone can build on the Cosmos network. This differs from Polkadot where you would need to stake a sizable amount of DOT, Polkadot’s native currency.

Another key difference is the issue of scalability. There is no limit to how many parachains the Cosmos network can support unlike Polkadot which experts estimate can support around 100 parachains. 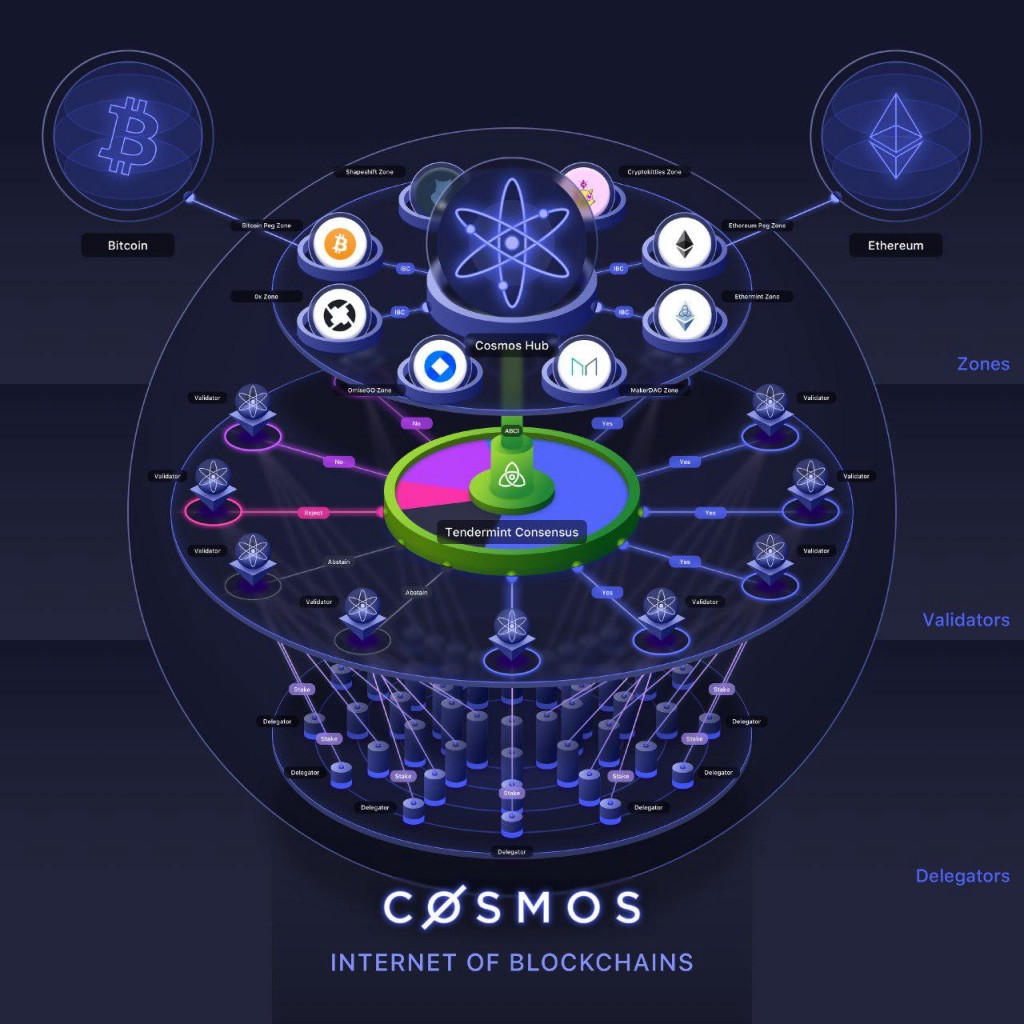 Another advantage of Avalanche is the fact that there is no limit on the number of subnets, and anyone can create a subnet on the Avalanche network, increasing decentralisation. By comparison, Polkadot requires a large stake of DOT to become a validator and only plans to accommodate a maximum of 1000 validators on the relay chain currently.

Becoming an Avalanche validator is rather appealing and also quite simple. The hardware requirements are low enough that most standard laptops or desktops should be suitable to begin validating. You can also stake tokens behind a validator and receive rewards when the validator successfully confirms transactions. Validators can earn up to 11% Annual Percentage Yield (APY) and set a custom percentage fee of the reward they keep from delegators who back them.

To summarise, we think the battle of the layer 0 blockchains is only just getting started and it remains to be seen if there is only room for one of these 3 blockchain technologies. But if one is going to rise to the top, the speed and scalability gives the Avalanche network a huge chance of being that one.

On the other hand, it’s definitely worth remembering just how early we are in terms of the decentralised web. The landscape could look a lot different in just one years time from now. Could the real Ethereum killer not even exist yet? It’s certainly quite possible.