5 Reasons Why NFTs Will Boom 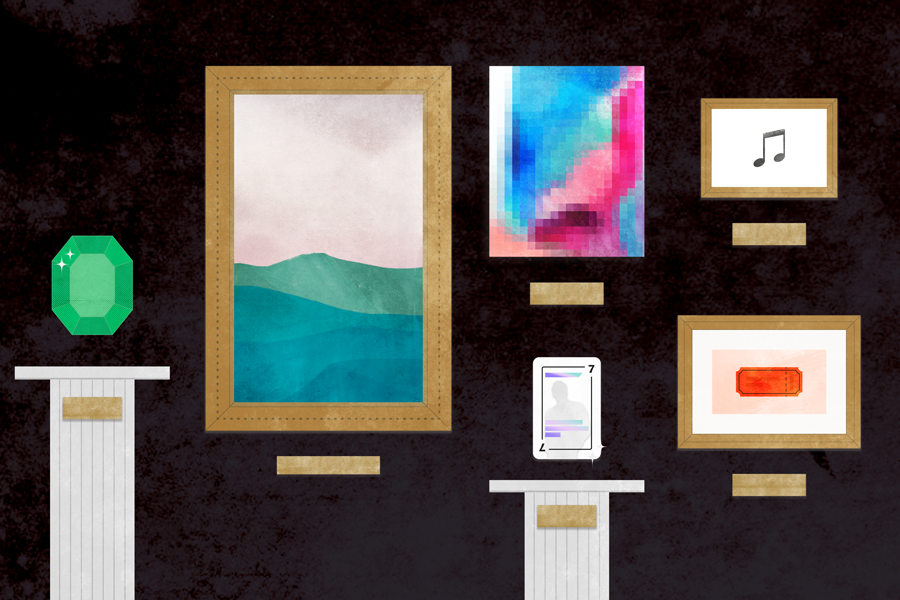 From Paris Hilton to Snoop Dogg, from Gary Vee to Beeple; everyone seems to be trying their hand at NFTs. But why are these opinion splitting, money making digital tokens about to take off?

We’d have to go back over thirty years to find the birthdate of the world wide web. In the early days Web 1.0, as it has come to be known, was a read-only internet. In other words, web pages contained information for users to read but that was pretty much it.

The early to mid 2000s saw the second coming of the web a.k.a Web 2.0. This was a far more advanced internet that integrated payment systems and reviews, which facilitated the meteoric rise of companies such as Amazon.

Now we prepare ourselves for the arrival of Web 3.0. An internet that is built upon decentralisation thus reducing the need for centralised servers and databases. DeFi, crypto and the metaverse are all terms you may have seen or heard connected to Web 3.0 but the current flavour of the month that everyone is talking about is non-fungible tokens a.k.a NFTs.

What is an NFT?

NFT stands for non-fungible token. That probably doesn’t help, so let’s break it down. If something is fungible then it is interchangeable or at least it’s value is. For example, cash is fungible. You can exchange a £10 note for a different £10 note, or for two £5 notes and the value wouldn’t be affected.

The token part represents digital tokens. A digital token may take the form of a currency, utility or a digital asset. But remember currency, such as Bitcoin, is fungible as one bitcoin can be interchanged for another.

So if we put it all together, a non-fungible token is a unique, one of a kind digital asset. Commonly, they take the form of digital art in the shape of an image or video which has been minted as an NFT and then sold on the blockchain. Sites such as Binance, OpenSea and KnownOrigin act as marketplaces for NFT creators to sell their digital art to potential buyers.

If you still need a little convincing about NFTs, here’s 5 reasons why they are about to boom:

1.We are already using digital assets

Whilst NFTs may seem like a fairly new craze, we have been adopting digital assets for quite some time.

One place in particular where digital assets are already very prominent is in the gaming world. Examples you may have heard include FIFA Ultimate Team cards, Fortnite skins and Call Of Duty maps.

These digital goodies that can’t be physically touched have arguably laid the platform for the emerging NFT market.

It’s clear that the world is already comfortable, or maybe even obsessed, with digital assets such as these.

For example, FIFA ultimate team which is EA sport’s trading card/game mode hybrid where players play games to win coins that can be used to purchase players or mystery packs, generates a whopping $1.49billion a year. EA even had to investigate allegations that staff were selling the rarest cards to gamers for as much as $2,500! (Try explaining that to your Grandparents!)

This just goes to show the importance of digital assets today. In particular to younger age groups – 15-24 year olds make up 23% of the total video game audience in Europe. So whilst once upon a time, schoolyard popularity was based around who had the latest designer clothing or the most expensive phone, nowadays it seems peers are more impressed by who has the rarest fortnite skin. But should we expect popularity to soon be determined by discussions such as who owns the hottest NBA top shots collectible?

For some reason we as humans love to collect. We always have and it appears we always will. However, NFTs could be about to change the way in which we collect things.

Going back 20 years, one of the best ways to flex your proverbial muscles on the school playground was to own the rarest Pokemon trading card or by being the first to complete the annual football sticker book. NFTs are now about to do what so many other things have done before by giving a digital makeover to something that has been successful in a tangible format.

It will follow a never ending list that includes maps, job advertisements, photographs, CDs, train tickets, radios, paycheques, phonebooks…you get the message. Just about everything we use has transformed from a physical format to a digital one.

Now NFTs are about to digitalise the world of collecting – one of the last few remaining uses for physical goods. Trading cards and event tickets are examples of items that we love to preserve and be able to physically touch. But potentially not for much longer.

Maybe trading cards are about to be stored in your digital wallet and swapped via the blockchain rather than in the corner of the school playground? Could sports clubs incorporate match tickets with NFTs that go on to increase in value when the game turns out to be an all-time-classic? These are quite realistic options of what life could look like once NFTs boom.

As investors all over the world kick themselves for not buying bitcoin sooner, people are on the lookout for the next big thing to yield enormous ROI. Could this be NFTs? Quite possibly.

The world, gen z in particular, appears to have gone crazy about investing. Whether it’s due to the pandemic, years of low interest rates, or a combination of factors, more and more people appear to fancy themselves as the next Warren Buffet.

Staggeringly, this year saw more money invested into stocks than the previous 12 years combined and in the US 1 in 10 people have invested in cryptocurrencies.

So could NFTs become the next big investment to yield bitcoin-like returns? If Mike Winkelmann’s (a.k.a Beeple) creation, Crossroads, is a sign of things to come then the answer is yes.

The digital artist created a 10 second clip centring around Donald Trump’s loss of the 2020 US election. It features the former president lying face down on the side of the road, covered in graffiti. The piece originally sold for $66,666.60 in November 2020 before the original buyer resold for an eye-watering $6,600,000 – almost 100 times more than its original price. Clearly some NFTs have already proven to be a gold mine. However, as more and more people learn about digital tokens, it would appear the ceiling is not even in sight – this could make now the perfect time to start building your NFT portfolio.

Celebrities and influencers have never driven culture as much as they are doing so today. It seems that anything with a famous name attached equals pound signs in a world that appears to think less rationally and more ‘Kardashianally’.

If you want proof then look no further than the valuation of some of the biggest celebrity owned brands. Kylie Jenner’s Kylie Cosmetics is valued at over $1billion which is dwarfed by Rihanna’s cosmetics brand, Fenty Beauty, which is worth a whopping $2.8billion. As celebs seemingly put their name to anything on-trend in an attempt to increase their net worth, more and more of them are starting to get involved in the NFT world. As a result, this is pushing the concept of crypto-art further into the spotlight. Paris Hilton, Snoop Dog and Jack Dorsey are just a few of the names that have dipped their toe into the NFT waters.

Dorsey, co-founder of Twitter, sold his very first tweet as an NFT for just under $3million which he then converted to Bitcoin and gave to charity.

And if you’re looking for celebs and NFTs, look no further than Bored Ape yacht Club. The digital apes that have become a new way for the rich and famous to flex their financial muscles with stars like Steph Curry, Eminem and Justin Bieber all owning one of the 10,000 costly JPEGs.

As NFTs become more profitable, it’s a pretty sure bet that more and more celebrities will jump aboard the NFT bandwagon trying to cash in for themselves or for charities. Either way, this will further enhance the spotlight on NFTs and cause a growing proportion of mainstream society to learn about, and get involved with digital tokens.

How long before one of the world’s biggest names successfully cracks the NFT game causing a chain reaction that sees us all dive into the world of crypto-art. Could we be a Justin Bieber NFT album release away from a sonic boom? Here’s hoping.

For as long as the internet has been around, cyber security has been a major concern. Whether that’s our grandparents turning white at the thought of entering their credit card details online or Russian hackers disrupting US elections.

So what has this got to do with NFTs? Well, non-fungible tokens are traded using blockchain technology and smart contracts, which have the potential to make the internet a much safer and more transparent place. This advancement negates the need for central authority.

For example, if you were to purchase an NFT from KnownOrigin, your transaction would take place on the Ethereum (ETH) blockchain. You would purchase your NFT using ETH and a smart contract would automatically ensure the transfer of the NFT to your possession.

This also allows for transparency of ownership, which is very difficult to recreate in the physical and even the digital world of today. Once an NFT is transferred to a new owner, the NFT will be stored in the owner’s digital wallet where others can view exactly who owns the NFT.

These technological advancements are a God send for creators. NFT artists can create and sell their work safely in the knowledge that there will be no authenticity or ownership issues. This could apply to digital artists selling their crypto art, event promoters issuing tickets, or even to our personal health records. All of which could take the form of an NFT in the future.

So whether we like it or not, there’s a good chance that we will all be affected by NFTs in some way or another. It could be that you’ll be collecting NFTs to give you an advantage in the gaming world, adopting crypto-art as an investment strategy or just using them for everyday purposes such as proving ownership of tickets to events. Regardless of your reason for using them, just make sure you’re not left feeling like a Grandma after the inevitable boom of NFTs.